Peter Childs, of Hall Lane, Nettleham, has been charged with thirty-two offences including false accounting, fraud by abuse of position and theft in relation to Mencap.

Alison Childs, of Hall Lane, Nettleham, has been charged with twenty-nine offences including false accounting, fraud by abuse of position and theft in relation to Mencap.

Both have been released on police bail to appear at Lincoln Magistrates Court on Tuesday, 8th January 2013.
Posted by Administrator at 12:00 No comments:

Alan Hardwick, Independent (Lincolnshire), a former television presenter and public relations officer for the Police Authority, was sworn in to office yesterday following his victory in the election to the new post of Lincolnshire Police and Crime Commissioner.

With turnout plummeting to new depths across the country, Lincolnshire managed a turnout of 15.28%, slightly above the national average. West Lindsey had the highest turnout from the seven districts of the county with 17.72%.

The Count took place at seven locations across Lincolnshire. West Lindsey's count was undertaken at the West Lindsey Leisure Centre in Gainsborough and began at nine o'clock.  By half past nine it was clear the turnout was going to be low. By ten o'clock the first part of the count process, verification, was complete and increasingly bored count staff had to wait patiently until one o'clock for other centres to complete their verifications before the counting of ballots count begin. 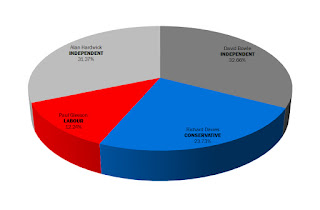 At one o'clock the counting of the first preference votes began and shortly before three o'clock it was clear that no candidate had recieved more than fifty per cent of the vote and could be elected:
Richard Davies and Paul Gleeson were eliminated and David Bowles and Alan Hardwick went through to the final round.

The counting of the eliminated candidate's second preferences votes took less than an hour, 9,429 were not vaild second preference votes and shortly before six o'clock the result was announced. 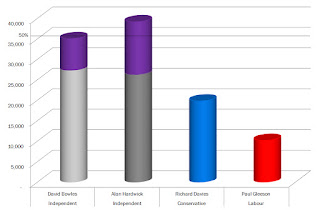 Posted by Administrator at 08:00 No comments:

Two teenagers have been injured in an incident on Riseholme Lane and local resident are calling for action. The two teenage boys, a sixteen year-old from Market Rasen and the a seventeen year-old from Grimsby, were hit by a car at 4.57pm on Tuesday, 6th November.

The older of the two boys is understood to be being treated for serious head injuries at Sheffield's Royal Hallamshire Hospital while the younger one has been discharged from Lincoln County Hospital after being kept in overnight for observation.

A  seventyh-four year-old man, from Lincoln, has been arrested on suspicion of failing to stop after the collision and has been released on police bail until Tuesday, 18th December .

It comes after one lady died in a crash on the road last July when her car collided with a tree.

Parish Councillor Mrs. Barbara Lane, said the road was used by drivers cutting through from the A15 to the A46. Speaking to the Lincolnshire Echo, she said:


"It tends to be used as a rat run and collisions like what happened on Tuesday don't surprise me at all.

"They're always mending and repairing fences down Riseholme Lane after cars have hit them. All the residents down here are getting fed up. It's a good job there aren't very many children down here.

"Another problem we have is with students and coaches using the lane to get to Riseholme College instead of the main entrance. I don't know what the answer is but Riseholme Lane isn't in a very good condition either and really needs patching up."

Meanwhile, Mr. Martin Finney, a resident of Riseholme Lane, commented to the paper:


"If you're not careful you can easily get into some trouble on Riseholme Lane, whether you're a driver or a pedestrian."


"Once we get full details through about what caused this collision, we can assess whether any changes to the highway are needed."

Posted by Administrator at 08:30 No comments: 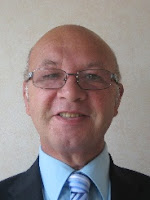 "We have all be so saddened to hear of the untimely and sudden death of Mel Starkey.  In his passing West Lindsey has lost a very able servant of the people and the council.

"Always a Liberal Democrat, he wasn’t one to wear his politics on his sleeve and was well respected by all members in the chamber across the political divide.

"Mel leaves a family of whom he was justly proud and our thoughts are very much with them. We will all miss him and his ready wit and style of being a councillor."

Posted by Administrator at 10:00