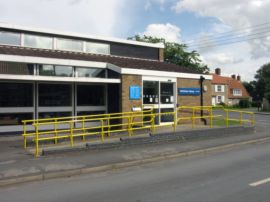 Over seventy people overflowed from the small function room at the White Hart, High Street in Nettleham yesterday evening at the first meeting of the Save Nettleham Library Group.

Organiser, Emily Evision, opened the meeting to discuss the proposed changes to library services in the county being put forward by Lincolnshire County Council who have to save multi-millions of pounds from its budget. Mrs. Evision said:


"It has been fascinating across party lines, the village has come out incredibly strongly protective of its library as a resource.

"Our fear is that we currently have a library that is open four days a week, and we are being offered a library bus, for four hours, every two weeks."


"Local people recognise that we are living in difficult financial times for local authorities. I wanted to show my support to keep Nettleham's library open.

"I think, at this stage, local people are hoping they will be able to convince Lincolnshire County Council not to cut the library service in Nettleham.

"My concern is that the meeting last night did not formally agree to look at other options - such as a community, volunteer-led library - and with a tight window of opportunity to make an expression of interest to the County Council this may prove a disadvantage if we are to keep the library in some form going forward."

Lincolnshire County Council say that the library service needs to change if it is to remain affordable and better meet local needs. They point to successful community-led ventures in Saxilby and Waddingham as a way of improving service and value for money outcomes.

Posted by Administrator at 07:00 No comments:

A By-Election is expected to be called to fill a vacancy in the Bracebridge Ward of Lincoln City Council following the removal of Cllr. Darren Grice, Independent (Bracebridge Ward), after a six month absence from meetings of the Council.


"Where a member does not attend any meeting of the council for a period of six consecutive months from the date of their last attendance, then they cease to be a member of the council, unless they have received prior approval of absence.

"No such request has been received from councillor Grice. Councillor Grice’s last attendance at a meeting was Council on 8th January 2013. Accordingly, as there are no meetings scheduled which he could now attend, his term of office will cease on 8 July 2013.

"The Council must then declare the vacancy. Where the council declares the office to be vacant, the election to fill the vacancy must be held within 35 days of this date."

A timetable for the by-election is expected to be published shortly after Monday, 8th July 2013 and will mean a by-election will probably be held on Thursday, 8th August 2013.

In the last election, in the Lincoln Bracebridge Division of Lincolnshire County Council, which covers, broadly speaking, the same geographical area as the Bracebridge Ward of Lincoln City Council the result was:

The Conservatives will hope their candidate is successful, and have impressive form in the area with six out of seven wins since 2007. Labour will hope to show they are making advances, although this is not a strong area for them - they took a city council seat in 2012 with a majority of seven votes. UKIP will be looking to improve their poll rating from May's local election and will seek to improve their position to second place, from third. The Liberal Democrats, who have never had particular strength in Lincoln, will want to improve their poll rating and see it back above 5%.﻿﻿

Traditionally this seat has not been contested by the Lincolnshire Independents, if they field a candidate they will probably have limited impact. The BNP have infrequently fielded candidates in this seat and they could again for a by-election, depending on the strength of their party locally following the party's route from the electoral battlefield in Britain.
Posted by Administrator at 10:00 1 comment: